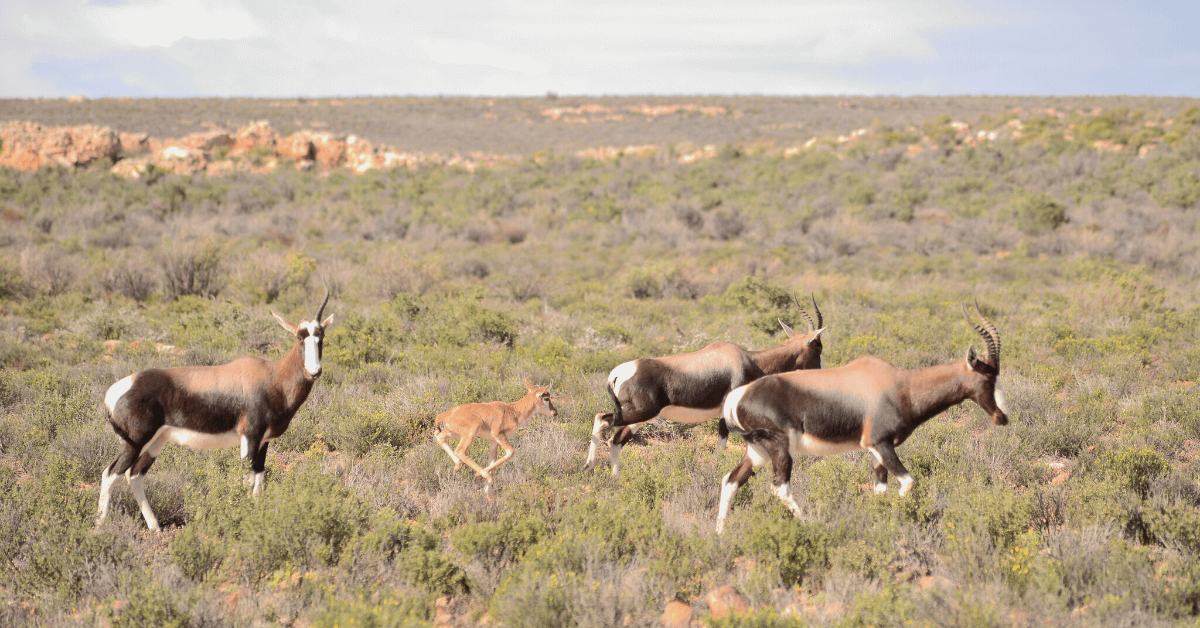 In September of 2020, Kagga Kamma Nature Reserve welcomed the first Bontebok calf born on the Reserve in recent years. This is a celebrated milestone for Kagga Kamma’s conservation efforts, as well as that of this critically endangered species.

While the year 2020 may not have been kind to the human population of the world, the wildlife at Kagga Kamma Nature Reserve thrived. 2020 saw a drastic increase in rainfall, nearly double, in fact, of that which blessed the plains in 2019. As a result, the spectacular wildflowers blanketed the fynbos in an array of brilliant hues during spring and the antelope herds on the property welcomed newborns amongst their ranks. 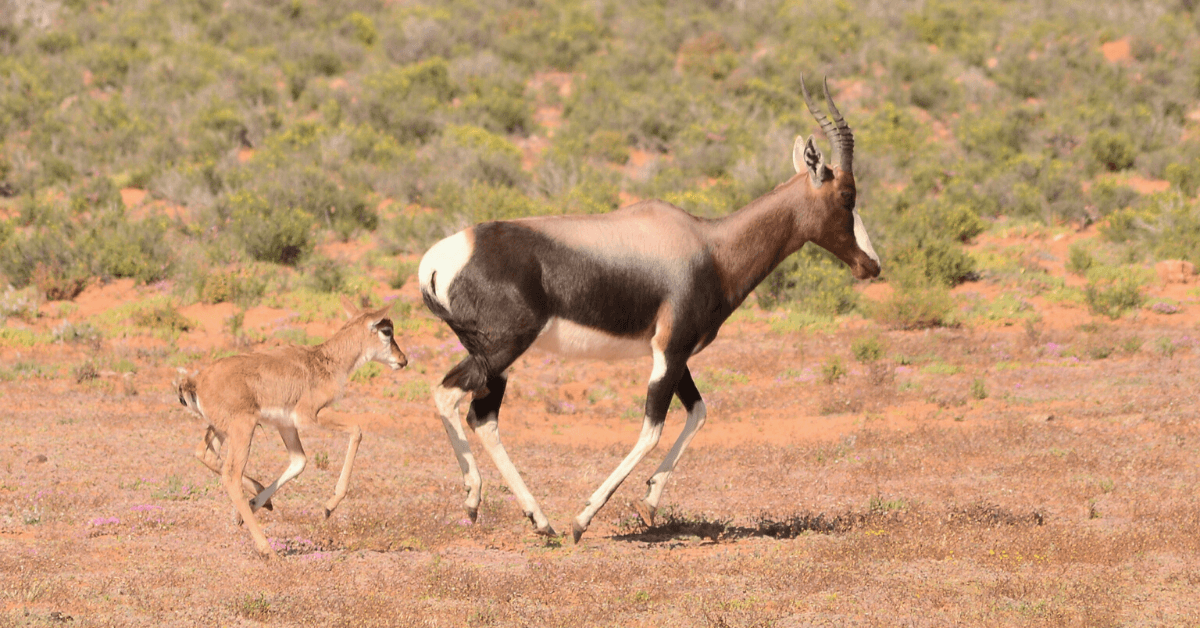 Of the antelope species found at Kagga Kamma Nature Reserve, the Bontebok is the most critically endangered. Bontebok are endemic to the Western Cape and only a small population remains, due to overhunting by European settlers during the 18th and 19th centuries. The Bontebok species’ numbers dwindled dangerously low, to 30 known individuals, before the Bontebok National Park was established to protect them. The success of this National Park is, in part, attributed to a fascinating gene found in the makeup of the Bontebok (Damaliscus pygargus pygargus); they are unable to jump. Previously considered an insignificant trait of the Bontebok, their inability to jump fences, along with the efforts of the Bontebok National Park conservation programme, resulted in the species being brought back from the edge of extinction. Today it is believed that approximately 3000 Bontebok individuals exist.

Thus the most exciting Reserve news of the spring season was the announcement of the birth of a Bontebok calf; its debut with the herd naturally excited and delighted the Nature Guides and staff at Kagga Kamma. While our Nature Guides wait for the opportunity to be able to identify the sex of the youngster, the feisty four-month-old no longer relies on its mother for nourishment, but is already an independent grazer. The Bontebok calf is very healthy and displays boundless levels of energy, which keeps the other Bontebok occupied and the Kagga Kamma guests entertained on Nature Drives. When born, calves are lighter in colour. This helps the young blend in with the environment to avoid predation, and as they grow their tri-coloured coat takes hold. This transition is usually complete within the juvenile’s first year and the beginning signs of this transition can already be seen on our four-month-old. 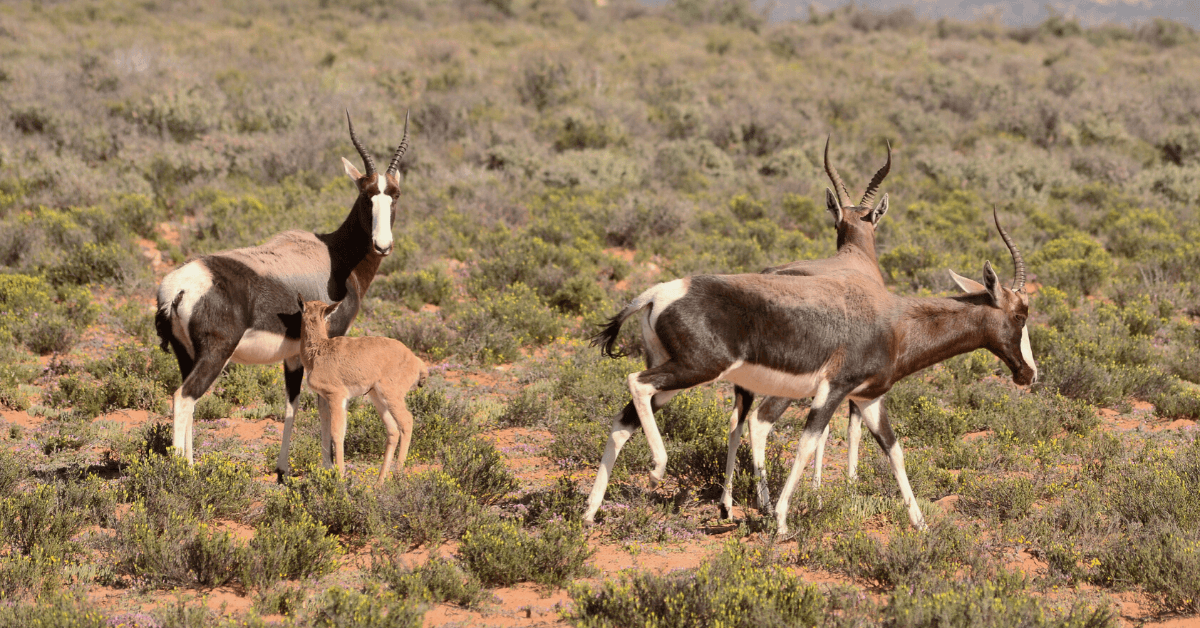 Kagga Kamma is home to two adult Bontebok individuals, which are dependent on rainfall to ensure a viable habitat for population growth. While the previous years did not yield enough of this precious sustenance, 2020 provided ample rain for the foliage to flourish. This resulted in the birth of the latest spritely addition to the Nature Reserve’s population. The Kagga Kamma Team looks forward to following this little one’s journey. Hopefully, with sufficient and steady rainfall in the years to come, we may see further population growth of this beautiful and fascinating animal.

Kagga Kamma Nature Reserve, nestled within the Cerderberg region of the Western Cape, is a protected heritage and natural site with the aim of preserving this unique region and the endemic species, such as the Bontebok and Spectacled Dormouse, which call it home. The conservation of flora and fauna on the Nature Reserve is rooted in the belief of minimal interference, though the antelope’s diets are supplemented, if needed, in the winter months, to ensure a natural-as-possible environment. Guests can learn all about the incredible species on the Reserve on a Guided Nature Drive.

Read more about the Bontebok on our blog: The Bontebok.