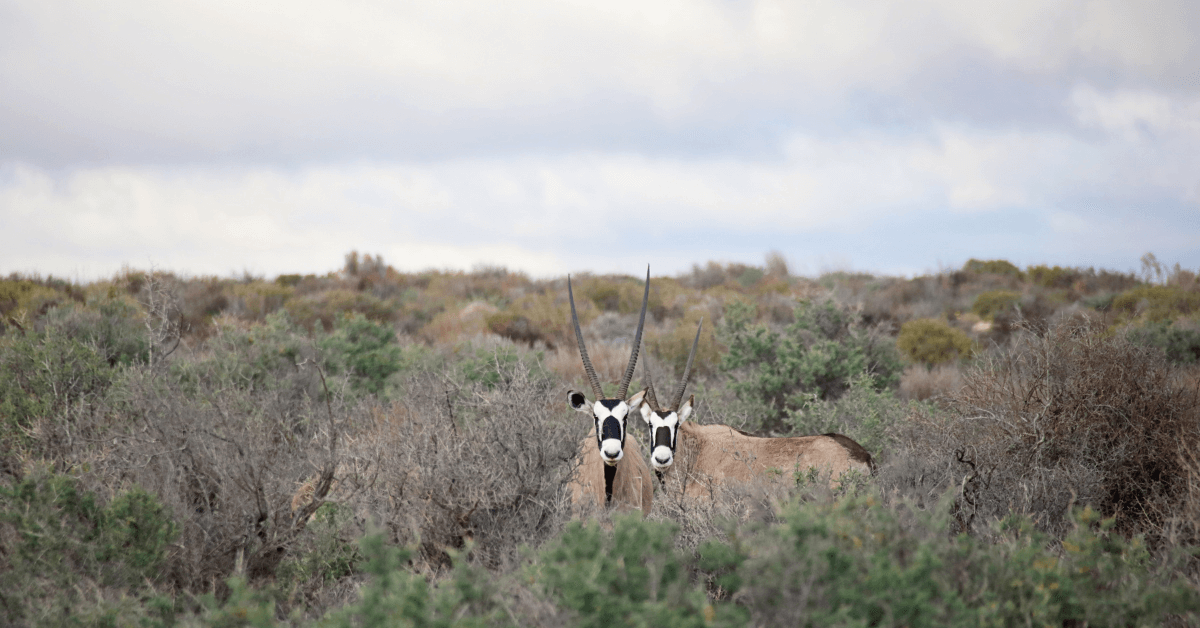 The sun sets on another glorious Kagga Kamma day. In the distance, the burning sun fades into a molten sphere, until it disappears from view below the horizon. A cool breeze lifts and a sigh of relief from the fynbos can be felt as cool darkness sets in, offering respite from the day’s heat. A pair of speared warriors step into the frame; a matching set of elegant horns tower above their heads as they graze peacefully on the fynbos plains of Kagga Kamma Nature Reserve.

While they may often be referred to as ‘spear antelope’, they are in fact Oryx, commonly known as Gemsbok in South Africa. This majestic antelope species is easily distinguished from others due to their straight and tall horns, bold white and black faces and strong frames. The Gemsbok (Oryx gazella) is closely related to three other species of Oryx, namely: the Arabian Oryx, which is the first species to ever be reclassified from ‘extinct in the wild’ to ‘vulnerable’ due to successful breeding programmes, the Scimitar Oryx and the East African Oryx. The South African Gemsbok is the only Oryx which is not threatened and is commonly found throughout Namibia and regions of the Karoo, as they are the only antelope species known to survive for extended periods in a true desert. 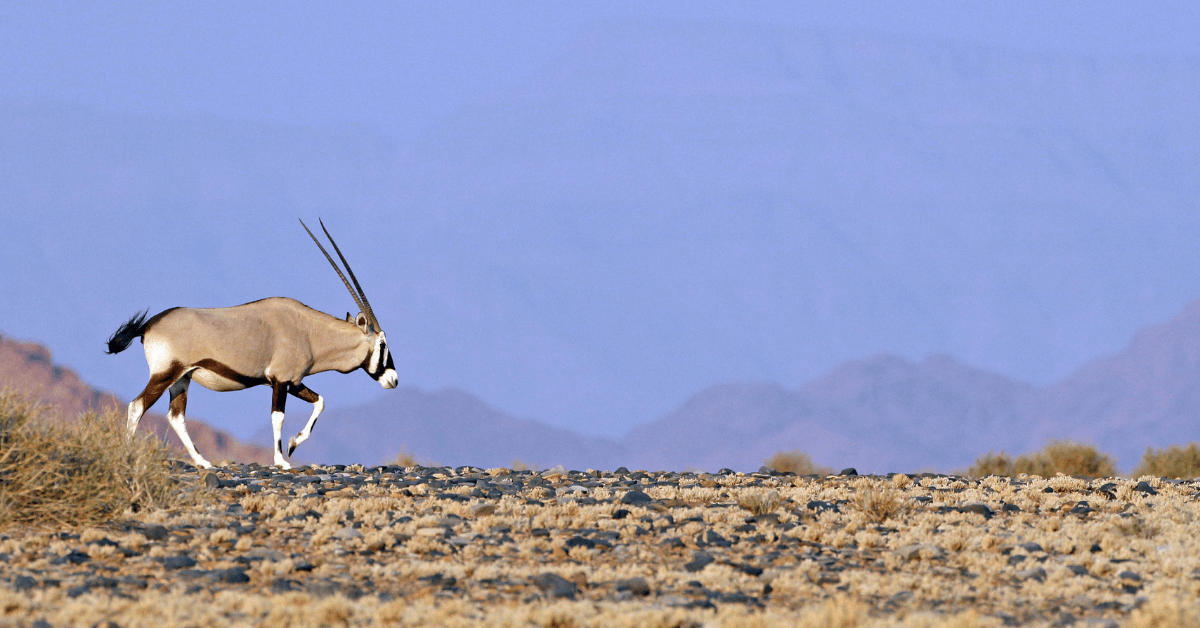 We refer to the species as ‘speared warriors’ due to their innate ability to not only survive but to thrive in these tough, desert environments. They are able to maintain healthy populations due to a number of characteristics. It is widely believed that antelope with white underbellies, such as the Gemsbok and Springbok, have evolved that way to assist in deflecting the heat which rises from the ground; a welcome ‘trick’ when temperatures in the Cederberg region can reach 40°C (104°F). Gemsbok also adorn a well-insulated, light-coloured coat, which is effective at keeping them cool during the hot, dry summers and offers warmth during the winter, when temperatures plummet at Kagga Kamma. The family of Oryx species has also evolved to not require regular supplementation of water; instead, the Gemsbok is able to make do on the moisture found in leafy foliage and in the water-dense bulbs and tubers of select plants; Gemsbok are able to dig up the succulent, water-rich plants, such as the Gemsbok cucumber and Kalahari truffle. While this behaviour is often noted in the Kalahari, Kagga Kamma’s ‘speared warriors’ are supplemented with freshwater sources and thus are not known to forage in this way. Instead, Gemsbok on the property prefer to browse shrubs, such as Eriocephalus Africanus and Pteronia Incana. 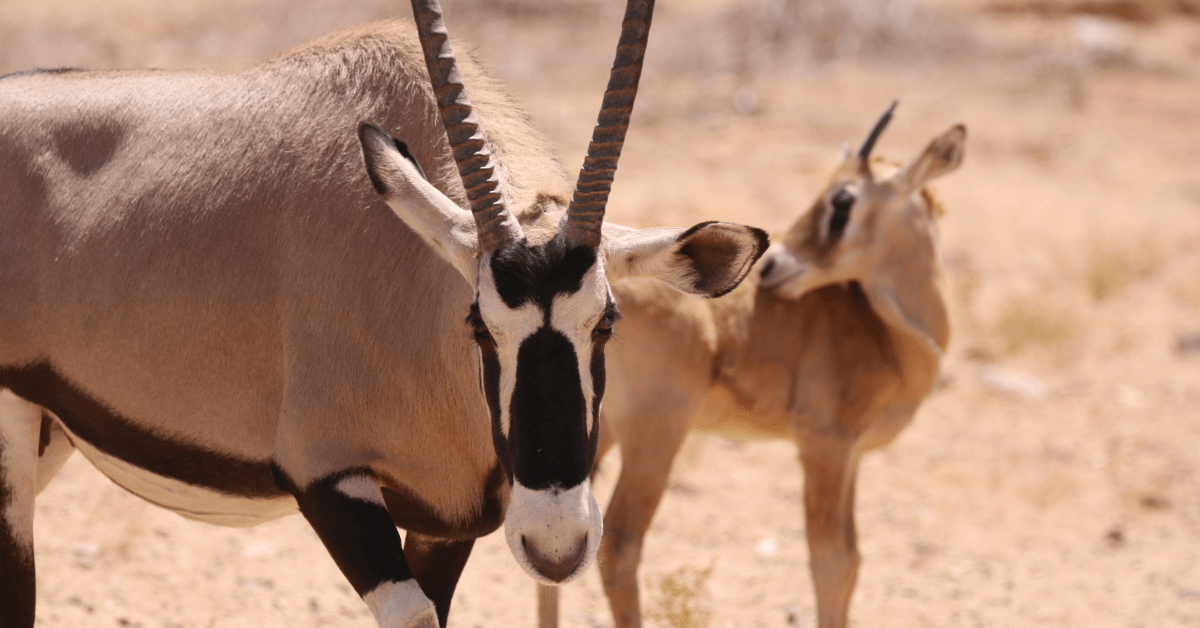 Perhaps the most impressive technique of all, however, is the Gemsbok’s perceived ability to suppress the function of sweating to preserve water, a scarcity during the drought-stricken summer months. Instead, Gemsbok allow their body temperatures to reach 43°C (109°F) to expel excess heat by radiation and regulate their body heat through a series of blood vessels in the nose. A network of these specialised vessels, called ‘carotid rete’, is located in the nasal cavity of the Gemsbok. During periods of excessive heat, the Gemsbok pants, which causes the rapid circulation of cool air through the nose, where a thin layer of epidermis in the muzzle allows the air to cool the bloodstream before it is pumped to the brain; this keeps the animal from overheating. This is especially impressive when considering that the average antelope overheats to the point of death, due to brain damage, at a body temperature of 41°C (107°F).

Kagga Kamma Nature Reserve provides a protected area for species such as our favoured ‘speared warriors’; a space which aims to preserve not only the history of man but that of the unique wildlife which has roamed these plains for millennia. Embark on an incredible wilderness experience with the Kagga Kamma Rangers to delve into the characteristics of each species which make them so perfectly suited to this landscape: reservations@kaggakamma.co.za. Interested to know the techniques of the Khoi and San tribes for collecting water in desert regions? Read our blog, ‘Water from Ostrich Eggs‘.