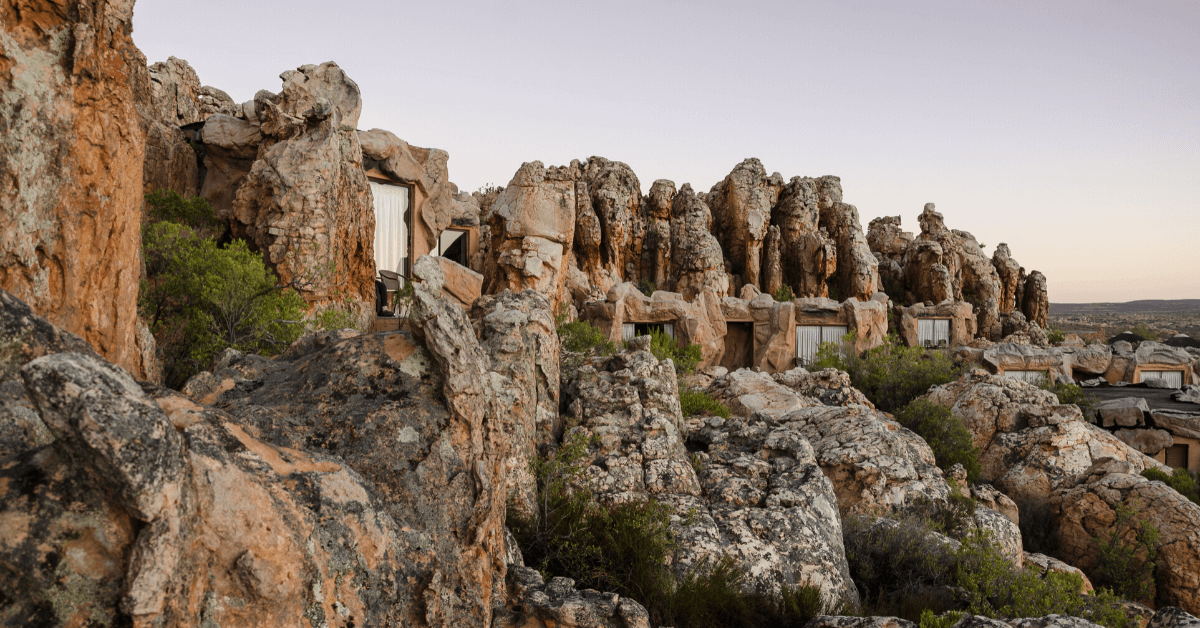 The sun stretches, and with a heavy yawn, slowly inches up into the sky, painting brushstrokes across the Cederberg landscape. As you sit on a terrace, in awe of the vastness of it all, you can’t help but notice strange forms in the shadows, where the sun has not yet reached; like clusters of cities in the distance. As the sun reaches higher still, sunlight touches these formations and suddenly you realise they aren’t cities at all, but the incredible rock formations of the Cederberg.

These rock formations – which stretch like fingers into the sky, or take the form of twisted monsters, alien spacecraft, or all manner of other-worldly things – can be found all throughout Kagga Kamma Nature Reserve and its surrounds. Their shape and form intrigues the minds of all our visitors and adds to the unique experience of visiting this location. Whether lounging alongside either of the two swimming pools, strolling up to your Cave Suite, or taking a long hike through the Karoo-like terrain; these formations are everywhere, each one unique and majestic in its own right.

The formations which lie within the boundaries of the Kagga Kamma Nature Reserve are numerous and can be viewed: along the hiking trails, on a guided tour, or from the comfort of the Main Lodge and Suites. Further afield, within the Cederberg Mountain Catchment Area, you will find the well-known: Wolfberg Arch with neighbouring Wolfberg Cracks, the Maltese Cross, Stadsaal and the Tafelberg Spaceship.

It is interesting to see how these three layers of sedimentary rock have created the formations which can be viewed today. Table Mountain, for instance, has a flat top due to the erosion of the shale shelf and top layer of sandstone. While in the Cederberg, and notably the formations against which the Kagga Kamma Cave Suites are built, you can clearly see how the shelf of shale sediment has created horizontal platforms or vertical grooves throughout the range. The colour of these formations is characteristically reddish tones, caused by the minerals (iron and manganese) in the sandstone. Where shelves of shale have been protected, a number of interesting palaeontology discoveries have been made; including prehistoric flora and trace fossils of marine invertebrates.

Interested to see the incredible rock formations of the Cederberg? Book your escape today: reservations@kaggakamma.co.za.